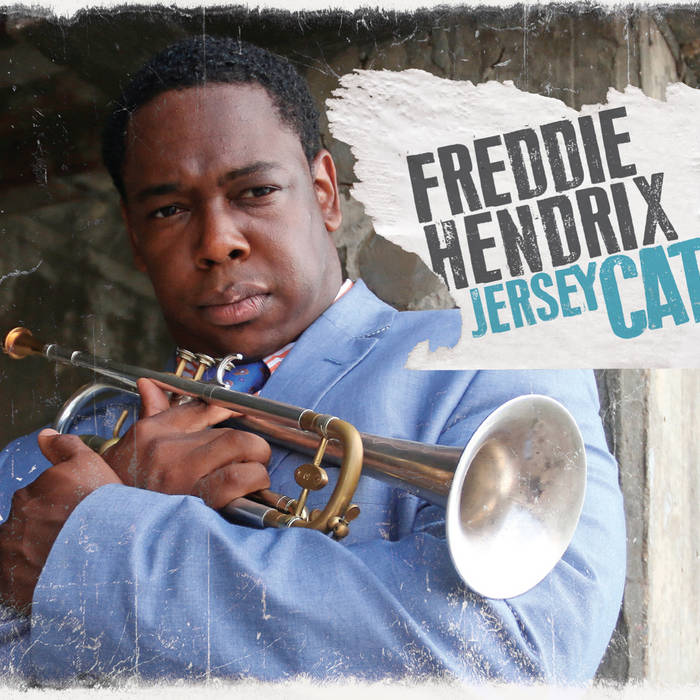 zoot39 Love the instrumentation, with 4 horns lending themselves to interesting voicings. Both Hendrix and Burton play with great fire, and I found 'Invitation' in particular fascinating. The horns play on top of what almost sounds like a shuffle beat from Brooks and the rhythm section. Favorite track: St. Peter's Walk.

Many know New York City as the Mecca of jazz. Very few recall the illustrious players hailing from just across the Hudson in New Jersey. Many of the greatest jazz names hailed from the Garden State, including Wayne Shorter, Count Basie, James Moody and trumpeter Woody Shaw. It is to correct this oversight that the fantastic trumpeter Freddie Hendrix presents his new recording Jersey Cat, a wide ranging collection that represents the unique swagger and groove of the Jersey jazz musician.

Growing up in Teaneck, Hendrix was originally attracted to music by the way of doo-wop and R&B, most notably that of local legends, the Isley Brothers. His initial foray into playing was on the guitar, a struggle that led him to trumpet and junior high band. It was under the tutelage of teachers like Dave Brown, Dave Rogers, Robert Hankle and his church organist Dr. Maredia Warren that Hendrix’s love of jazz blossomed. A failed audition for a Teaneck area big band led to a renewed commitment to his studies, which finally led to Bachelor’s and Master’s degrees in Music Performance and, ultimately, to performing for two United States Presidents.

Out of school, Hendrix hit the ground running, playing with pop groups and jazz luminaries, including Christian McBride, Alicia Keys, Jimmy Heath and Wynton Marsalis. It was his work with the Count Basie Orchestra and Teaneck resident Rufus Reid that led to his first forays outside of the States, influencing much of his writing for Jersey Cat. But it was his relationships in his home state that really made the recording possible.

The members of the ensemble that Hendrix assembled were friends and regulars at drummer Cecil Brooks III’s beloved, but now closed, Cecil’s Jazz Club, in West Orange. Brooks not only plays on Jersey Cat , but also produced the recording. The rest of the cast includes all former or current New Jersey residents, including saxophonists Bruce Williams and Abraham Burton and pianist Brandon McCune, along with Manhattan resident trombonist David Gibson and the lone Brooklynite, bassist Corcoran Holt. The ensemble is talented and flexible, as Hendrix provides compositions for amalgamations of all sizes, including a octet that allowed him to use his arranging and part writing skills in an Art Blakey Jazz Messenger vein.

For the album, Hendrix wanted to provide a mix of original compositions and standard pieces that represented the strongest material in his book. He also wanted to make sure to represent the spirit of New Jersey, a more relaxed vibe that can jump off at any moment. The way he did this was to incorporate influences outside of jazz, namely R&B and hip-hop, into his music, creating music that grooves but also swings and is simultaneously current and retro.

The recording begins with Tex Allen’s snappy “St. Peter’s Walk,” which Hendrix first heard on Louis Hayes’s The Real Thing with his hero Woody Shaw, whose playing Hendrix lives up to. The trumpeter’s tone is exquisite on the subdued quartet take on the classic “You Don’t Know What Love Is,” while his travel inspired “The Journey Man” is a powerful Latin based blues with great group interplay. The title track is another original that features a laid-back tone and soulful melody, but with moments of flair. Hendrix’s “On The Rise” takes inspiration from Darren Barrett’s “First One Up,” but holds up on its own as an exciting medium fast post bop gem.

The romantic “Madeira Nights” is an early piece inspired by Hendrix’s initial trip to Portugal. The trumpeter pays tribute to another hero as he performs Freddie Hubbard’s “Hubtones” in a unique arrangement with a distinctive hip-hop influenced bounce. Hendrix’s take on the standard “Invitation” is inspired by the sound of the Ahmad Jamal trio’s Live at the Pershing session, but expanded to octet. The melody of “Whims of a Waltz” appeared fully formed in Hendrix’s mind on a moment’s notice when a blast of wind hit his face, while Horace Silver’s “Peace” has occupied a place in the trumpeter’s favorite ballad pieces for as long as he can remember.

On Jersey Cat, Freddie Hendrix provides a powerful program of original tunes and choice covers that cement his playing as not only some of the best in New Jersey, but also in the jazz world as a whole.

Bandcamp Daily  your guide to the world of Bandcamp